For one-day-only in mid April, Google Glass was made available online to U.S. residents over 18 - for a mere $1,500.00 plus tax and shipping. Google hasn't shared sales numbers, only announcing that they sold out of the "Cotton” white frames.

The ultra-hip device with its teensy screen can discreetly perform most of the functions of a smartphone, including displaying web content, sending messages, placing video calls, and shooting photos/video. But as with most just-out-of-the-gate innovations, questions about privacy, safety and security are already being raised.

Which leads us to ask: “Is There a Glass Ceiling?”

• Glass Block: The 5 Point Café, a Seattle restaurant/bar, has already banned them ("If you’re one to blow your savings on a pair...plan on removing them before you enter The 5 Point."). Other eateries were quick to follow suit.

• Safety Glass: In spite of (still) limited numbers of Google Glass on the street, there are growing reports of people having them snatched off their face.

• Glass Action: Delaware, New Jersey and West Virginia are among some of the states considering laws to ban driving with Google Glass. Surely more will surely follow suit.

• Glass House: In a Columbus, Ohio movie house, a prescription-Glass wearing customer was detained and interrogated by Homeland Security after being suspected of movie piracy. AMC followed up with: "Wearing a device that has the capability to record video is not appropriate at the movie theater."

As is the case with most innovations, the limits will be tested, calibrated and re-calibrated to protect users from themselves – and us from them. As in, “one man’s ceiling is another man’s floor.” But we can only wonder how high the Glass ceiling will be? 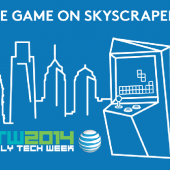 Articus Sr. Art Director Jeffrey Bouchard recently worked with our friends at Technical.ly Philly to design the official T-shirt for Philadelphia Tech Week 2014. Highlight on opening night is the world's largest game of Tetris, played and viewed from Eakins Oval and displayed on the side of the iconic Cira Centre about half a mile away. Participants were offered the T-shirt which features the Philadelphia skyline and game console in the shape of the building.

About Philly Tech Week
Philly Tech Week is a week-long celebration of technology and innovation from April 4th through the 12th, 2014. Approximately 25,000 people attended 140 events organized by 300 partners, including a spellbinding game of the arcade classic Tetris on the side of the Cira Centre.

About Articus
​Articus is an integrated marketing communications firm in Philadelphia, offering award-winning strategic, branding, creative and media services. Articus drives engagement and loyalty for its clients and their brands through targeted, compelling creative and communications.

Unless you’ve been in a coma or in an ashram for the past 6 months, you can’t have missed the onslaught of cute kitty videos. So many in fact that they’ve left kitty-dom to become “memes.” Memes, defined as “an idea, behavior, or style that spreads from person to person within a culture,” go viral at the speed of light (or very fast, in any case).

Some brands have created or elevated meme stars to new heights — Grumpy Cat, once a mere meme, was just named Friskies’ new spokesperson and had a front row seat at the MTV Music Awards. Other brands have built on or leveraged the power of popular memes by developing original creative, such as this Cravendale Milk’s ad.

Recently, however, there has been a spate of lawsuits involving memes that are based on or use copyrighted material. Seinfeld memes are always good for a laugh - until you try to apply the meme to a brand or commercial message. Keyboard Cat (to stick with our theme) is the cute piano-playing meme that was appropriated by Warner Brothers into a game – without bothering to check the copyright and trademark registrations. And while it’s unlikely that the owner of a copyrighted meme will pursue an individual or small company for infringement, who wants to spend the time in court to find out?

It’s increasingly easy and tempting to scrape that perfect photo, swipe that cool video clip, or leverage that viral kitty meme into marketing and social content. But someone created it and owns the rights to it.

Better to be original. Better to leverage the underlying concept and viral appeal of a meme but connect the dots creatively and differently. Like the milk ad, putting the zeitgeist to work for a brand in an "ownable" way is virulently brilliant.